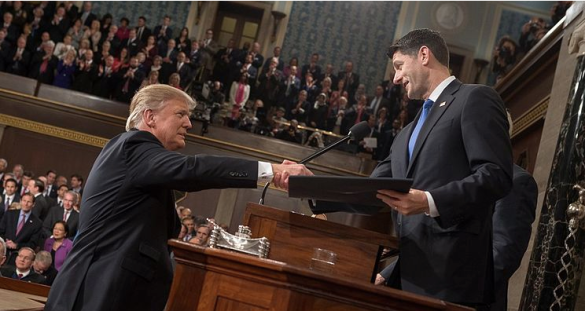 WASHINGTON DC.  The White House today announced a major new healthcare-related benefit.  Trumpcare will now cover post-existing conditions for the 24,000,000 people estimated by the Congressional Budget Office to lose healthcare coverage under the new plan. “Obamacare did nothing for the post-existing.” explained House Speaker Paul Ryan. “Trumpcare rights that wrong.”

Donald Trump immediately delivered on this promise.  The President said in an interview that during meetings at the Vatican, he convinced God to guarantee that everyone who loses coverage will get into Heaven, or at least get a few weeks a year respite from Hell, depending of course on available seating.

During the same interview, while brushing away accusations that he also asked God to smite Robert Mueller, Trump did confirm that his family was given coveted trademark rights to the Trump brand in “all lands devoted to the afterlife.”  Ethicists harrumphed that the deal was a payoff for the Executive Order weakening the Johnson Amendment, a set of rules that govern a politicized pulpit.  God denies the connection. “It was my will,” said God, exercising the prerogative to divine judgement.

Republicans applauded the new benefit. Speaker Ryan pointed out that the post-existence of millions will mitigate the impact of substantial cuts in the availability of food and housing for the poor while creating much needed jobs in the fast-growing mortuary sector.  “Everybody wins!” exulted the Speaker.