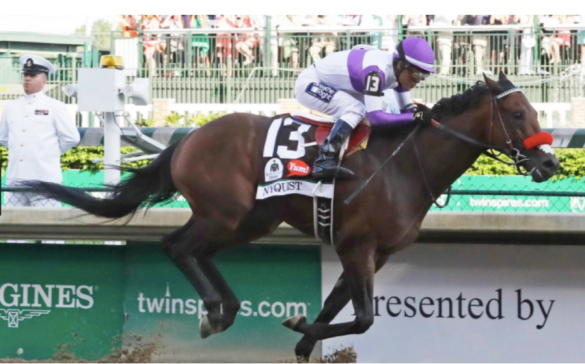 LOUISVILLE, KY.  Airline execs have teamed with the thoroughbred racing industry in a move designed to benefit both. Kentucky Derby winner Always Dreaming will begin new duty deplaning airline passengers after he completes his run at the Triple Crown. “With a buck like that, we can drag six, maybe seven passengers at a time.” said an airline exec.

The industry believes that the prestige of being dragged by a Kentucky Derby winner will counter any passenger concerns.  “It’s been a rough couple of weeks.” admitted an industry exec.  “But people love horses.”  The industry is considering replacing flight attendants with other farm animals, though an unfortunate incident involving a pig on an EL AL flight exposed weaknesses with this strategy.

“This is just the sort of lift we need.” said a spokesperson for the racing industry.  The industry has been in the doldrums since the cancelation of Mr. Ed, and has taken a steep downturn over the last decade with the emergence of Internet gaming, broadband cable, and on-demand TV.  “When Joanie loves Chachi became available 24x7x365, let’s face it, it was over.”

Even the Triple Crown has suffered.  Since 1986, only two of the three races are actually run each year.  “We just broadcast reruns of old Belmont Stakes races.” said the spokesperson, “No one seems to notice.”