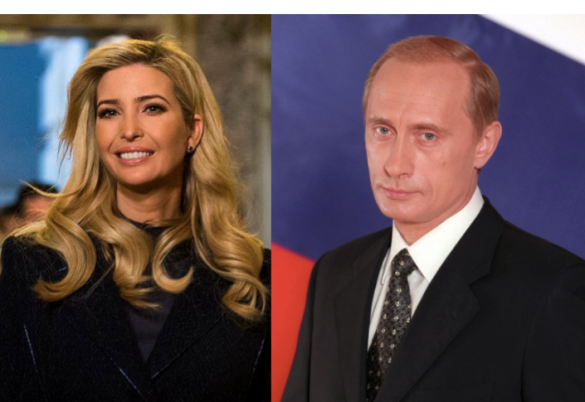 WASHINGTON, DC.  Dispelling with one move ethical concerns, charges of nepotism, and investigations into Russian election meddling, Donald Trump today disowned his two closest advisors, daughter Ivanka Trump and his son, Russian President, Vladamir Putin.  “I’m just glad it’s out in the open.” said a wistful Putin.  As proof that he is a Trump, Putin pointed out that the last three letters of his first name, “mir” and the first three of his last, “put”, are an anagram for “I Trump”.

“Case-closed.” said Senate and House investigators looking into allegations of Russian interference during last fall’s election.  “This wasn’t meddling by Russia, this was love.” said Press Secretary Sean Spicer. Spicer also confirmed that Putin can keep his White House office, but must return his bike and Lego set.  Critics complain that Putin hasn’t ridden his bike in years, preferring instead to longboard around the Kremlin.  “Talk about a slap on the wrist.”

Some view the twin disownments through a different lens, as a punishment for any of his inner circle who get press coverage asserting that they have influence over him.  Steve Bannon paid the price recently after the New York Times pictured him with a Trump hand puppet he claims to use to control the president’s eye movement and facial gestures. “Got a real laugh out of Xi with that one.” Bannon was quoted as saying, much to Trump’s annoyance.  Next thing he knew, Bannon was on the outs.

The Times ran a flattering story on Ivanka recently as well, asserting that she is seeking to soften her former father’s stance on social issues.  In retribution, Trump oversaw the stripping of healthcare from millions of the nation’s poor and working class.  “She has to learn.” said Trump.