OKLAHOMA CITY, OK. While merging onto I-40, an immigrant squeezed in behind another merging car, breaking the every-other convention that underpins the social order in the U.S., reported Fox News today.  “I was letting a 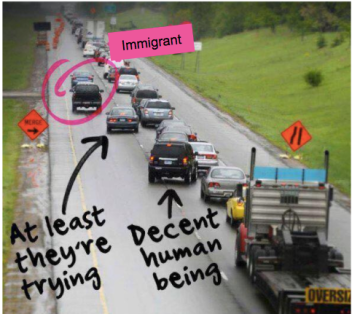 guy in front me,” said Craig Parrot, “and damn, this other car jumped in as well.”  Witnesses confirm the breach, with several reporting that the car had a pinata in the backseat.  “It was either a pinata or Mike Pence, couldn’t tell for sure.” said Parrot.

“The every-other rule goes to the heart of what makes America great.” commented Fox News.  Fox noted that the fall of Rome was precipitated by Goth double-dipping at an heure d’oeuvres table during a Senate debate.  “A great country is built on a foundation of trust,” intoned Fox, “First double-dipping, then impolite merging. Where does it stop?”

The Trump Administration reacted immediately, putting Homeland Security on high alert and transporting the First Family and their cache of Make America Great Again hats to their bunker below Mar-A-Lago.  “The bunker is decorated with Ivanka-With-A-V Wall Treatments,” said KellyAnne Conway, “perfect for brightening that tired nook, a 2000-mile long wall, or an all-cement bunker.”

“This will not stand.” said Fox.  “The president has gotten the message, and will be tweeting his outrage in time for the Hannity show.”

Photo Credit
Why Your Meme is Wrong